After the record year in 2017, 2018 was a comparatively quiet year in terms of incidents, although with a number of more serious incidents it didn’t necessarily feel like a quiet year. This review considers the 2018 statistics, both for the year as a whole and in the wider context of the past 15 years. In total 1603 incidents are included in the analysis. The presentation of data and definitions used is the same as that used in previous reviews published on the team website. These are repeated at the end of this article. The graph above shows that since 2007 the team have regularly been dealing with over 100 incidents a year, peaking in 2017 with 140 incidents. In 2018 the number of alerts stayed around the recent level whilst the number of full and particularly limited callouts reduced.

The PIE chart below shows a breakdown of the 2018 incidents by type. The most common reason for a ‘999 call’ to the team in 2018 was for injuries or medical problems at just under 40% of total incidents and 60 % of deployments (full + limited callouts). The proportion of Losts decreased which is discussed later in this note. The number of Cragfasts and Other’s remained fairly constant. 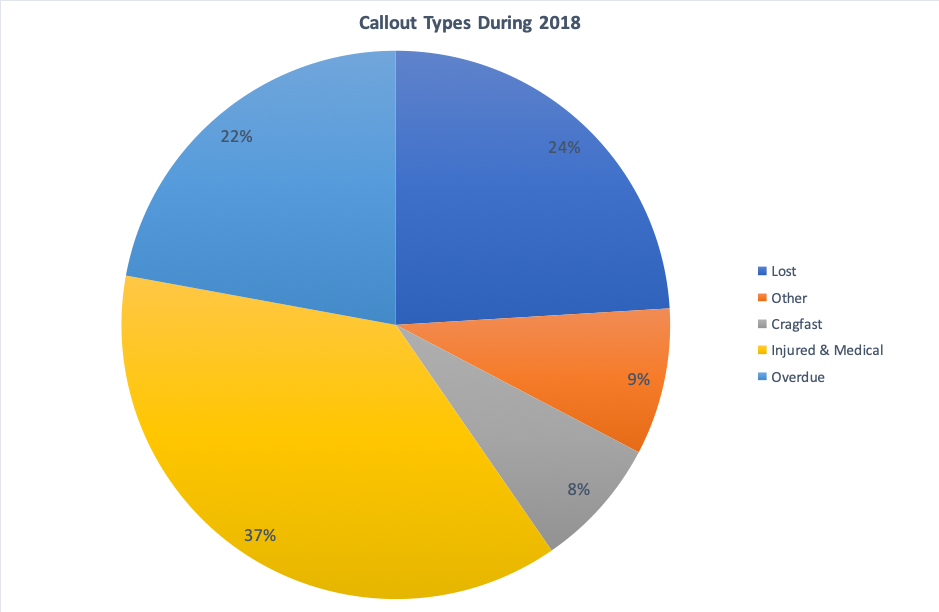 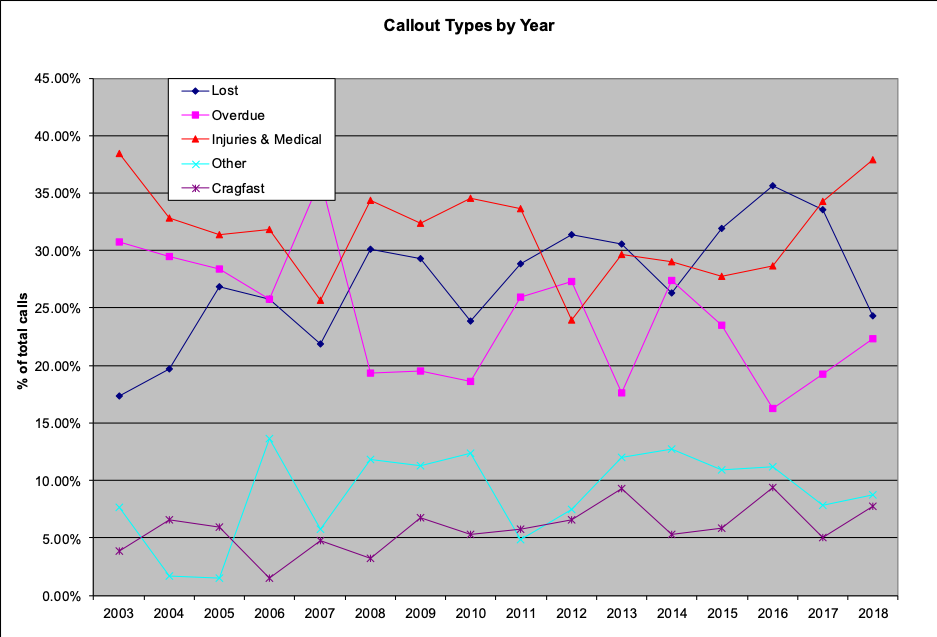 Callouts by Month & Time of Day

The plots below show the breakdown of calls by month of the year for 2018 and for the past 15 years as a whole. 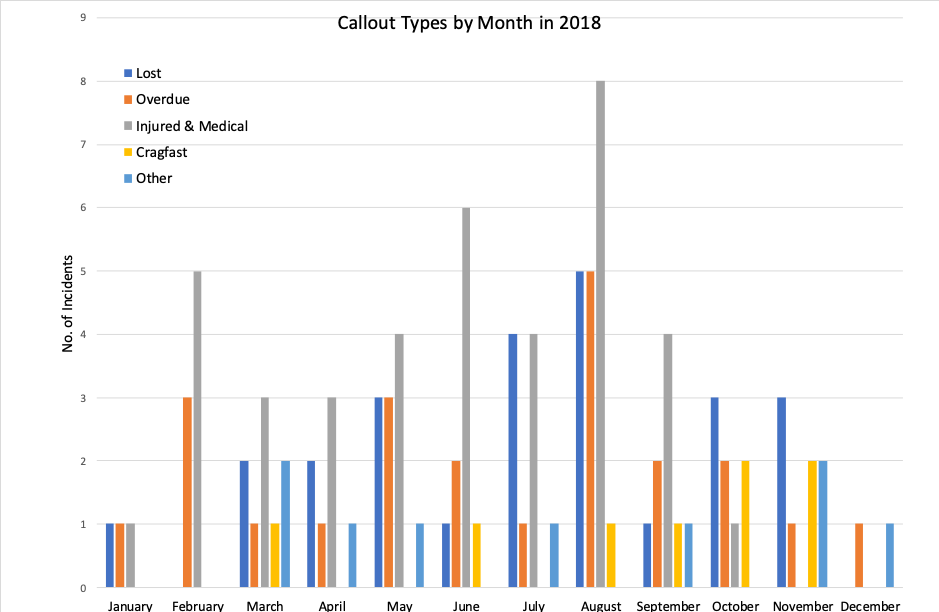 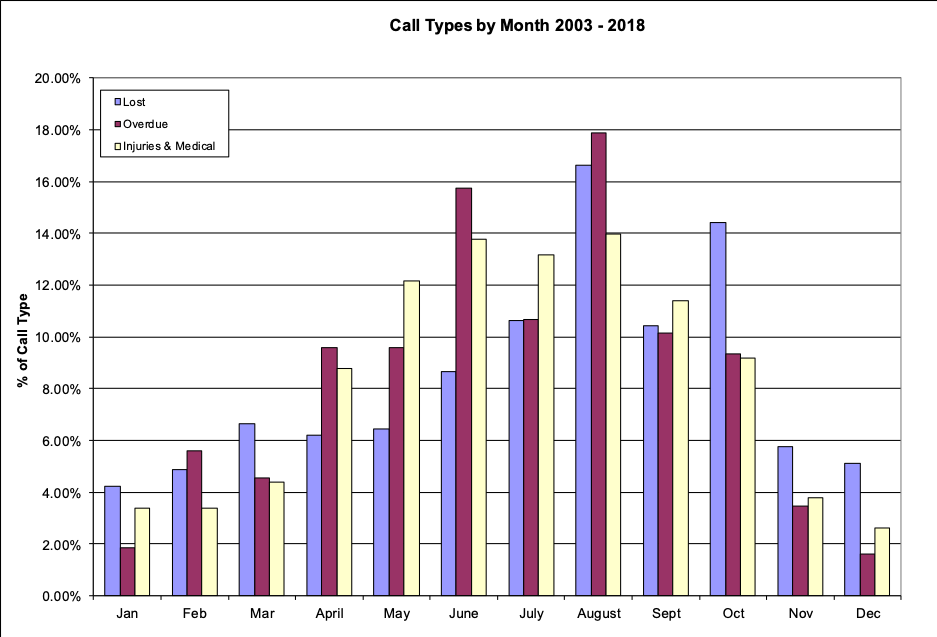 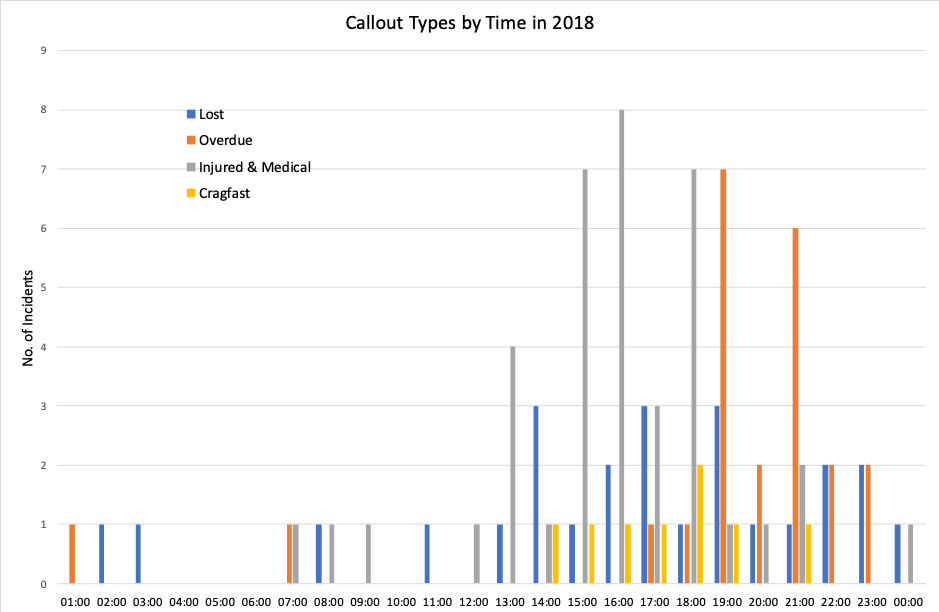 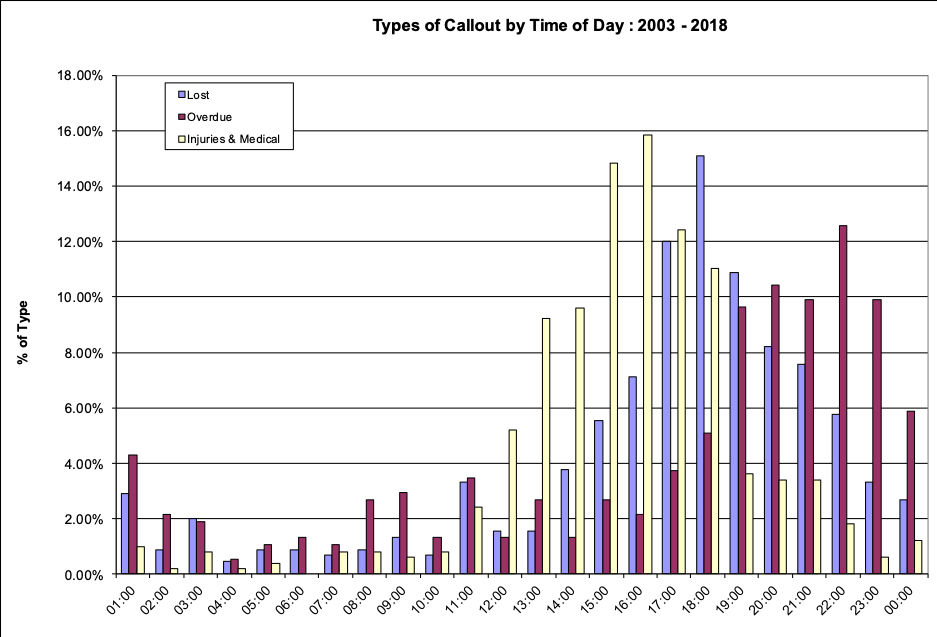 By recent standards 2018 was a relatively quiet year for the team with 104 incidents, 66 of which led to a response on the fell. Two points stand out in the statistics for 2018, the increase in the proportion of rescues that are injuries and medical problems and the reduced number of lost people. The graphs at the end of the article compare the numbers of Losts and Injuries + Medical for 2017 and 2018. Compared with 2017 there is a small increase in injuries in February and March which reflects the snowy winter, however, overall there were more injuries in 2017 (48). When comparing the Losts there were far fewer in the autumn of 2018. Whilst this is a welcome fact it largely reflects the improved weather conditions in 2018 compared to the previous year. It might have been expected that the warm, dry start to the 2018 summer might have been reflected in the callout statistics but compared with 2017 there is little obvious effect. What is notable is the low number of Losts in June which reflects a general reduction in 3 Peaks related incidents over recent years. August is clearly the busiest month for the team and in 2018 around 20 % of the year’s incidents occurred in that month. The small peak in Losts in October continues to reflect those who venture on the fells later in the day, often without a Torch as the nights draw in. 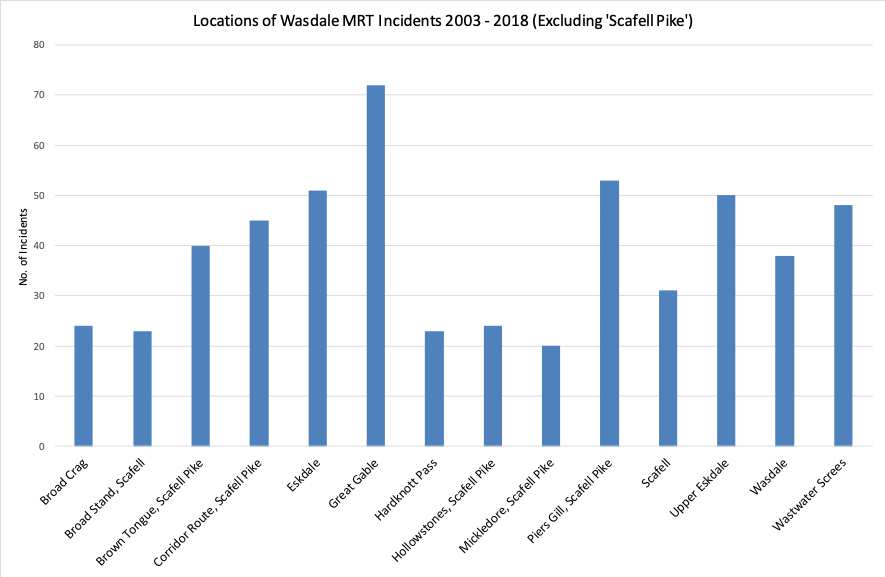 The previous chart presents a review of the main incident locations over the past 15 years where a location is stated in the records. It should be noted that over 400 incidents were simply marked as ‘Scafell Pike’ which have been removed as they would distort the presentation and many of which were at the more specific locations identified. A number of the fields are still somewhat general, eg : Great Gable or Eskdale. It might be slightly surprising that Broad Stand is low in the list with 23 incidents since 2003. Put another way, around 1/3 of those took place in 2018. Seven jobs on the Screes can also be seen as high relative to recent trends, averaging around 3 / year. There is no obvious explanation for either of these observations.

In summary, a relatively quiet year compared with 2017, particularly less people Lost which is welcome but with some serious incidents in the mix as well.

Definitions Used in this Article

Full Callout
All available team members are asked to turnout
Limited Callout
The callout message makes it clear only a small number, 5 – 6 people are needed to resolve the incident
Alert
The team are paged by the calling authority. The team leader and potentially others make enquiries by phone, car parks/pubs may be checked, but there is no response on the fell.
Injured & Medical
The main reason for the call is an injury or medical problem.
Lost
Someone on the fell reports them / party, usually by mobile phone to be lost and in need of assistance getting off the fell. It is different from cragfast in that it is navigation which is the challenge.
Cragfast
Person / party is stuck and cannot make further progress due to the difficulty of the ground, eg : it is steep and craggy. In this case they may know where they are but cannot move. It also includes people stuck on the Wasdale Screes.
Other
Includes non-mountain incidents such as cars stuck on Hardknott Pass, flooding, urban searches etc. Also includes false alarms with good intent. 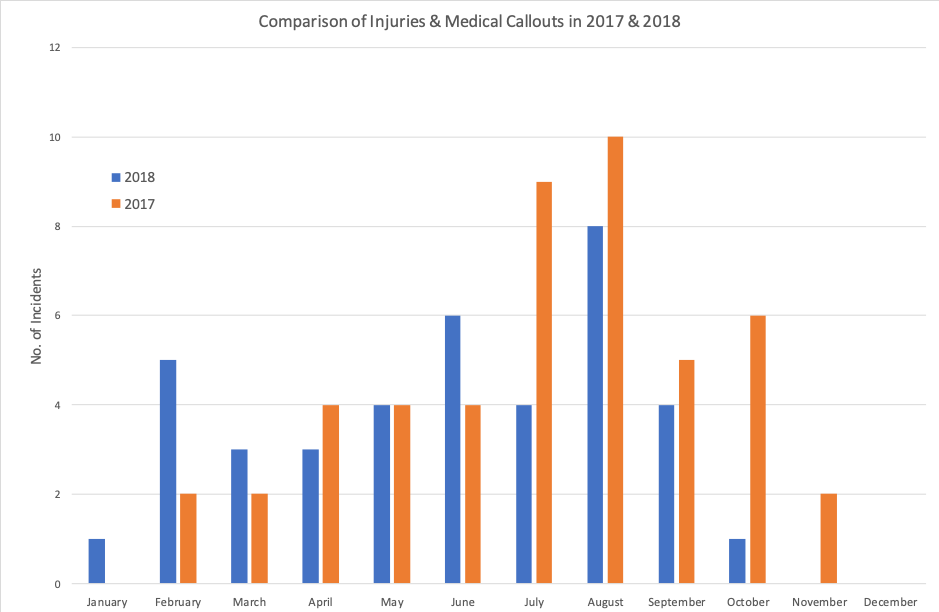 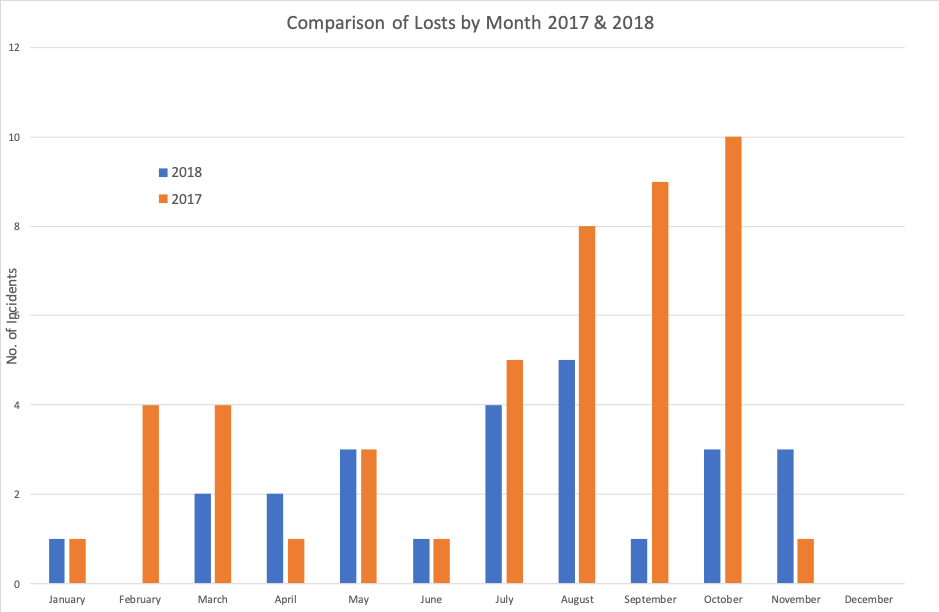 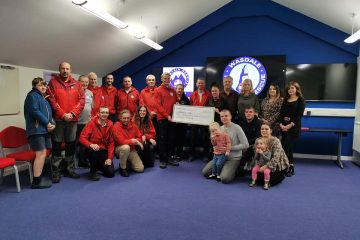 Wasdale and Duddon & Furness MRT had a special visit at our base yesterday from the Brown family, who presented us with two very generous donations. They have been fundraising in the memory and celebration Read more…

Ask yourself 3 questions before you set off: Do I have the right gear? Do I know what the weather will be like? Am I confident I have the knowledge & skills for the day? After the success of the Read more…