On 14th January 2006 Ian Angell died from a head injury sustained after a fall while hillwalking on A’Chrois in Arrochar. He was 66 and his death stunned all those who knew him. Ian was a former active member, (Technical Officer 1968-1985) and latterly an honorary member of the Wasdale Mountain Rescue Team and was a competent and skilled mountaineer. I was lucky enough to know Ian as a Team colleague and as a fellow climber here in the Lakes and in the Alps.

As a mere twenty two-year-old he climbed the Matterhorn solo. The Daily Sketch of the 31st July 1961 carried the headline ‘Mad Dog Ian Climbs It Solo’, a reference to Ian’s ascent in what was a post-war record of 3 hours 25 minutes. Zermatt Chief Guide Godlieb Perren is quoted as saying “It was a splendid mad dog act which only an Englishman would dare. He is a first class mountaineer”. Ian thought little of it and was quite embarrassed by the publicity.

He climbed many new routes in the Lakes and was particularly involved in the early development of St Bees Head. Ian almost lost his life in the 1970s when avalanched whilst skiing the Haute Route. Dug out by a German group he was found to be cyanosed and lifeless, but was successfully resuscitated by Tony Drummond, who was the Rescue Team doctor at the time. A day later Ian continued the route and successfully completed the trip. Typical of his determination and enthusiasm.

Ian was a qualified British Mountain Guide (1978), member of the Fell and Rock Climbing Club, the Alpine Club, Wyndham Mountaineering Club and the Scottish Mountaineering Club. In the 1990’s he made several visits to the Stauning Alps in Greenland, making a number of first ascents. One of which he named Shirley’s Peak after his wife and oft times climbing companion. His sense of humour, fitness, determination and a willingness to get the job done were his hallmarks. One example of his ability to lighten the mood in a worrying situation I remember well. On one Mountain Rescue training course at Glenmore Lodge Ian and myself were barrow boys for a 1500ft horizontal lower down a face to the left of Ardverikie Wall on Binnein Shuas. About a third of the way down we encountered a tottering stack of rock which seemed keen to join the scree below. We considered it carefully and managed to traverse away from it. With a chuckle Ian commented that ‘we could always hide under the stretcher should it come off’. Much to the consternation of the casualty firmly strapped onto the stretcher with no chance of escape! In any rescue situation it was most assuring to have Ian as part of the team and he was a great loss when he moved over the border to Largs.

Ian retired from the UKAEA in 1996 and successfully developed his own business. This gave him more time to devote to his passion of mountaineering. He successfully completed the Munros in 2005.

Ian died on the 14th January whilst descending A’Chrois near Loch Lomond. He was unlucky to fall into a hidden rock crevasse and reportedly died instantly. Arrochar Mountain Rescue Team found him the next day.

A deeply Christian and family man he is survived by his wife Shirley and their three sons, Timothy, Adrian and Stephen and his two grand-daughters Bethany and Megan. Ian is sadly missed by his family and all who had the pleasure to call him a friend and colleague.

As he lived so he died. Further tributes and reports can be viewed using the links below 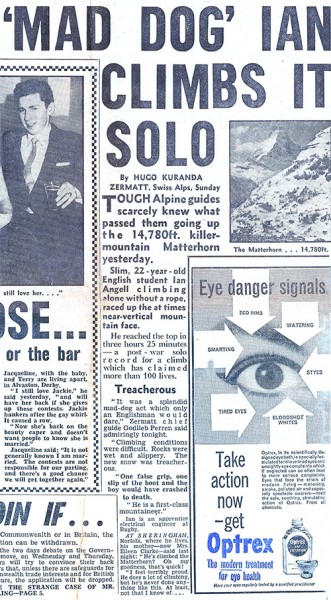 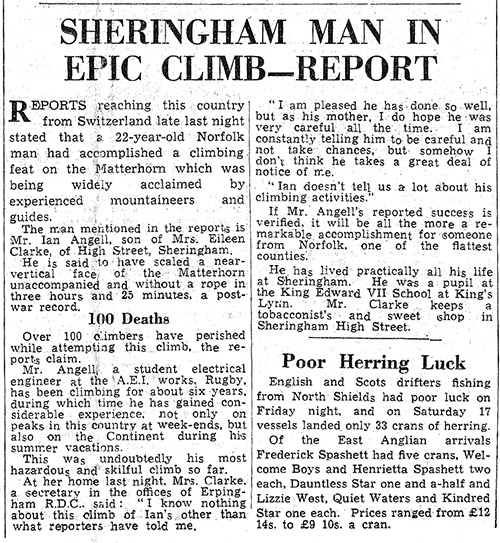 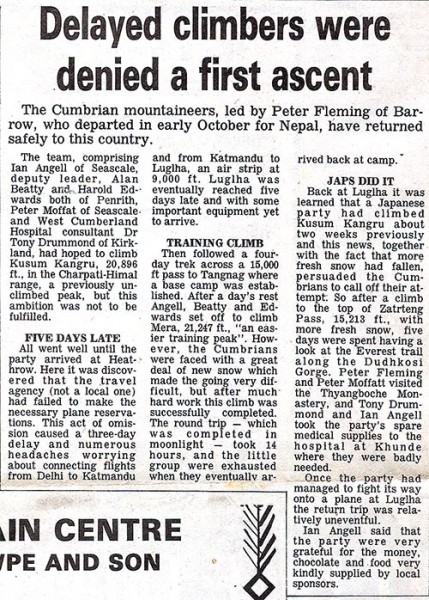 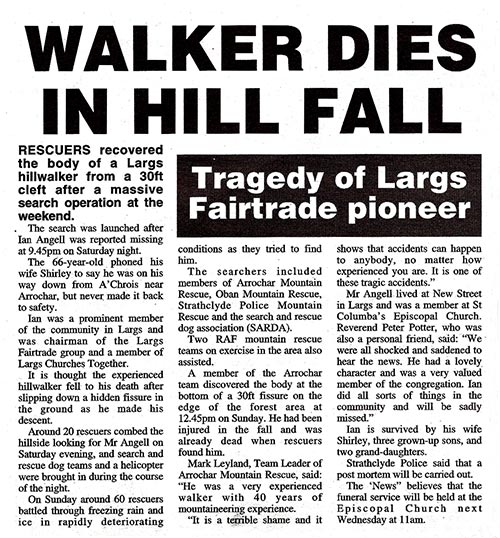