As team members were arriving on Monday evening for our monthly team meeting at base, a call came in regarding a male walker who had taken a 100 ft tumble fall around the area of Cam Spout waterfalls. He had obtained a nasty head injury, had been unconscious for a period of time and likely had other injuries.
The alarm was raised by his walking partner who had left the scene to raise the alarm. Unfortunately the nearest place to do that was a few miles away at the nearest farm.
Due to the nature of the injuries, the time elapsed, and the potentially difficult extraction, multiple air assets were requested, and both Helimed 58 and Rescue 199 were deployed quickly.
The team also responded quickly to Eskdale but were unsurprisingly beaten to the scene by Helimed 58. They had searched the reported location at Cam Spout with nothing seen, but then noticed a walker waving on the path out of the valley about a mile away. Remarkably the injured casualty had self rescued to the valley floor. This allowed Helimed 58 to land on scene and treat the casualty quickly.
Members of the team arrived just before Helimed 58 departed, and in the end no direct action was required by us.
Huge thanks to all that helped in this callout, including both helicopter crews, and the owners of the farm who raised the alarm and then looked after the casualty’s partner.
We wish the casualty a very speedy recovery. 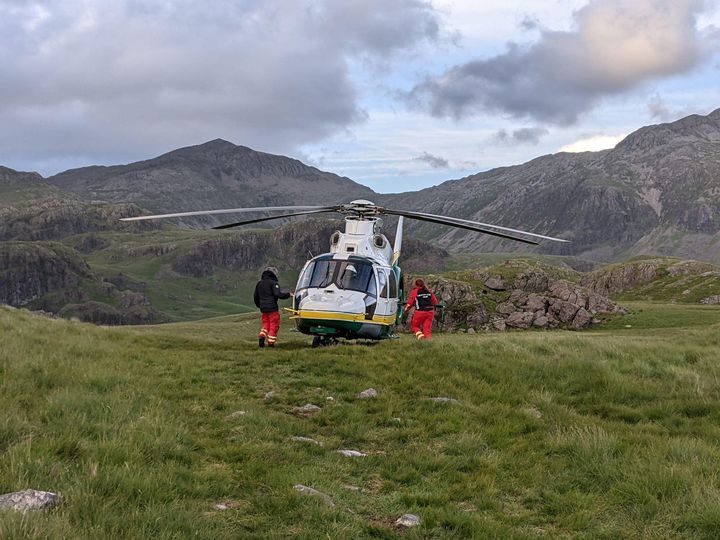