The team was contacted by Cumbria police at 01:30 in relation to a missing man who failed to arrived off the fells from a camping trip. The team was called out at first light to carry out a primary search. We found the male safe and well at around 09:30 near Stony Tarn above the Woolpack, Eskdale. The Lake District Mountain Rescue Searchdogs were on standby in case we did not find the male during the initial phase. 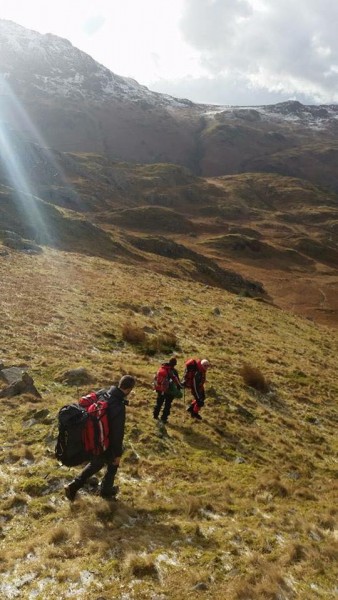 Incident10 in 2015 TypeFull Callout — Overdue LocationStony Tarn, EskdaleOther AgenciesLake District Mountain Rescue Search DogsThis time next week one of our team members will have set off running from Pooley Bridge in the northern Lake Read more…

Incident10 in 2015 TypeFull Callout — Overdue LocationStony Tarn, EskdaleOther AgenciesLake District Mountain Rescue Search Dogs As a volunteer team we are solely reliant on public donations to keep our team operational. We raise some of Read more…

Incident10 in 2015 TypeFull Callout — Overdue LocationStony Tarn, EskdaleOther AgenciesLake District Mountain Rescue Search DogsThe team would like to say a big Thank You to Leanne Ritchie who has raised the fantastic sum of £1,150 Read more…