The Easiest Way Up Scafell Pike (and Down Again!) 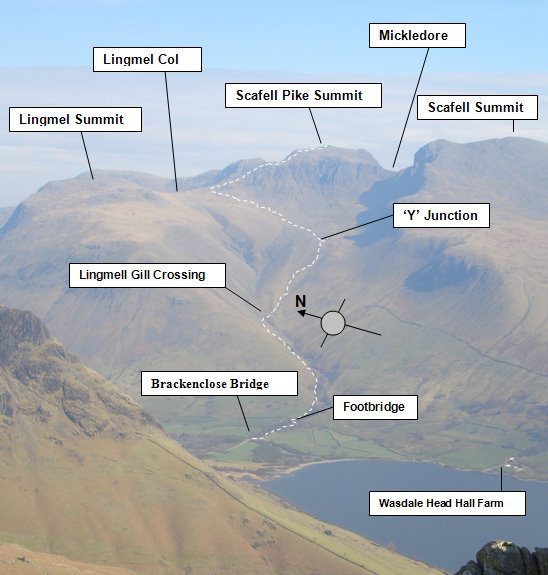 The Route Up Scafell Pike from Wasdale Head

It is important to note that there are always risks associated with hill walking, climbing and mountaineering. Being able to evaluate the conditions and judge them for yourself is one of the key skills in mountaineering, which includes walking the hills in the Lake District. If you are unsure as to whether it is safe to set out this may well be an indication that it would be good to gain more experience first or join an organised or guided group.

How long will it take?

It is impossible to say with any accuracy how long it will take any particular group to climb Scafell Pike. Times vary widely depending on the group’s fitness and the weather.

You should allow at least 5 to 6 hours even in very good weather.  Allow extra time in bad weather as you will walk more slowly and the route will be harder to find. Experienced walkers might well do it in less time than this but if you haven’t got much experience on Lakeland fells then you are in for a hard day.

From Borrowdale, Langdale or Eskdale.

You should allow most of a day i.e. 7+ hours.  These routes are quite long and involve difficult ground.  They require the ability to navigate over rough mountain terrain in any weather.

NB If you have already climbed Ben Nevis then it will take you even longer than if you were fresh. Please remember that it goes dark at night and it will go dark very quickly if it is cloudy. There is no street lighting on the Pike!

Which route should I take?

There are excellent routes to the summit of Scafell Pike from Wasdale, Borrowdale, Eskdale and Langdale. The route from the National Trust car park at Wasdale Head is the shortest – see further down this page for a map of the route. The Corridor Route from Borrowdale via Styhead Tarn is not too much longer but has a few rock steps and requires much better route finding skills.  The Corridor Route isn’t really a ‘corridor’ at all.  It is a traverse path with steep rocky sections and some interesting gully crossings! The Eskdale and Langdale routes are significantly longer.

Please note that paths in the Lake District are not waymarked or signposted.  The only aids to route finding that you will have are those you take with you.  The National Trust operate a small shop in their car park but it is only open when volunteers are available to run it and it carries only a limited range of maps; it is probably best to bring your own  map with you.  A detailed map is essential for navigation up and down the Pike.  The map needs to be detailed showing contours, paths, streams and cliffs.  Scafell Pike is covered by Ordnance Survey map OL6 – Lake District South West.  This is available in a waterproof form or you could fold the paper version and cover it with a transparent freezer bag.

In poor visibility or darkness all of these routes need well-practiced navigation skills.

NB – There are three routes off the summit of Scafell Pike.  Each of these routes reaches a path junction were the route splits.  In bad weather you will need a map and compass and the ability to use them in order to find your way back down the mountain.

If, during your descent, you find yourself at a metal stretcher box on a steep sided ridge/col with a very imposing mass of rock in front of you then you are at Mickledore. If you face towards the cliff, away from the summit of the Pike, then Wasdale is down and to your right and Eskdale is down and to your left. A cairn marks the start of a steep gully which leads down to Hollowstones and the path back to Wasdale Head.  The descent via Eskdale takes several hours and we rescue several parties per year who have got lost or benighted whilst trying to follow this route.

NB Piers Ghyll.  Piers Gill is the deep cut gill which the Corridor Route crosses 200m after leaving Lingmell Col on the descent from the Pike. Piers Gill, itself, is a ‘canyon’ descent with several short pitches and one longer one; do not attempt to walk down the bed of the stream!!  There is a path on the NE( river right) bank.  This path has very steep sections next to large drops into the gill – there have been several serious accidents in this area in recent years.  Also, after a bad rock step the path crosses Greta Gill which can be hazardous or impossible if the weather is wet. There is no path on the W ( river left ) bank and indeed there have been fatalities in this area in recent years.  If you intend to descend by the Corridor Route then make sure that you go all they way round the corner of the Piers Gill crossing and actually slightly uphill to follow the path, well away from Piers Gill, which leads down to Styhead.  For further details concerning the hazards of Piers Gill go to the section in accident black spots.

There is a general route map at the bottom of this page.

This link takes you to a more detailed route card for the easiest route up and down the Pike.  It has an insert map with details of the compass bearings and distances needed to find your way from the summit, across the plateau, to the start of the path back down to the Wasdale Valley.

Many dogs thouroughly enjoy the walk up Scafell Pike. However it can be a struggle for dogs not used to fell-walking. Most significant to dogs is the bouldery terrain on the summit plateau (from Lingmell Col upwards). If they are not used to travelling a significant distance over rough rocks it can cause problems with their pads. Scafell Pike is a poor choice for a dog’s first fell walk. Another problem area for dogs is the Wasdale Screes due to the large boulders and we have had to rescue a number of dogs in recent years from this area.

It is impossible to predict the weather accurately for more than a couple of days ahead. There are some excellent mountain weather forecasts available here. Obviously the weather is likely to best in the summer, however strong winds, severe windchill and even snow are possible all year round. To give yourself the best chance of an enjoyable day climbing Scafell Pike have a few days available and choose the one with the best weather forecast.

Will there be snow and ice?

It is not unusual to find reasonable quantities of snow high up on the mountain any time from October through to May. During the winter months the Fell Top Assessors report for Helvellyn will give a good idea of conditions in the Lakes in general. The BMC Great End thermometers provide readings for current air and ground temperatures. Whenever temperatures are sub zero water ice can form and winter equipment should be carried. If you are out without crampons and axes avoid circular walks and be prepared to turn back if faced with winter conditions. The summit temperature is likely to be between 5 and 10 degrees lower than the valley temperature.  The summit plateau, especially, is high enough up to catch strong winds which are not apparent from the valley bottom this can lead to severe windchill at all times of year.

What should I take with me?

Walking in a group.

We answer several 999 calls per year from groups which have split up deliberately and then failed to re-unite or become separated in mist. If you are walking in a group then please consider the following:

What about technology – mobile phones and GPS?

Technology can be very useful, however over reliance has caused problems for some of the people we have rescued. The mobile phone signal is patchy, in a real emergency, if you are high on the fells it could perhaps be better to head somewhere with a view of Sellafield or Keswick, two nearby transmitter sites. Navigation using GPS can make life significantly easier, however, batteries fail particularly in cold conditions on smartphones. Also you need an appropriate map (satnavs are not suitable!). If you are using a GPS to navigate make sure you have a paper map and compass as a backup and know where you are so that if the batteries die you don’t have to try to work out where you are.

Who should I tell where I am going?

Write down in detail where you intend to go, where your car will be parked, your vehicle registration number, and what time you expect to return, also include the mobile phone numbers of all members of the party. Give this to someone responsible with a cut off time at which to call the police, remember to include some time for navigational mistakes and enjoying yourself!

We are a team of volunteers who are available to help those in need 24 hours a day, 365 days a year. Please consider helping us by clicking here and making a donation so that we can continue to provide our service.

We hope you have a safe and enjoyable day on Scafell Pike, remember to make sure you have enough energy for your descent. There is nothing wrong with turning back before the summit and returning in the future for another attempt.