At Wasdale Mountain Rescue Team we recognise that our mission “To save life and alleviate distress” extends further than just the visitors and the local community who visit or live within our area of responsibility. Having team members with their own pampered pooches at home and also our very own much adored search dog Jess, we recognise the distress that both an animal can feel and also that of their owners.
Therefore, last night when Cumbria Police contacted us about a St. Bernard dog (Daisy) who had collapsed whilst descending from the summit of Scafell Pike and therefore unable to carry on; our members didn’t need to think twice about mobilising and deploying to help retrieve Daisy off England’s highest.
Displaying signs of pain in her rear legs and refusing to move, Daisy’s owners were able to keep her well hydrated and fed until team members were able to get on scene with a stretcher to help get them moving again quickly as the weather was due to deteriorate later that evening.
In advance of getting on location advice had been sought from several local vets regarding pain relief, possible issues specific to that breed of dog and how best to handle them in such stressful situations.
On reaching their location, team members carefully introduced themselves to Daisy so as not to cause any additional distress, and with the help of a treat or two members were able to assess her condition and administer analgesia for the pain.
A few different tactics needed to be tried until both Daisy and her stretcher bearers were all satisfied and progress down-hill could be made. It had become quickly apparent that Daisy’s cooperation was going to be essential if we were to make progress as Daisy made sure we knew that if she didn’t want to do something, she wasn’t going to do it. However, after a little persuasion and a bit of arranging the stretcher to become dog friendly and of course plenty more treats, the 55kg Daisy very quickly settled down with her chin resting on the head guard, having realised that we were trying to help her. From there on, apart from the odd little adjustment, the evacuation was found to be not that much different to a normal adult evacuation which is of course is the bread and butter of our team, which we have done hundreds of times before.
The adorable Daisy who unfortunately had a hard start in life until she was “rescued” by her current owners a few months ago, has since been reported to have had a good night’s sleep, snoring a little louder than normal, but back to her usual high spirits this morning. She apparently feels a bit guilty and slightly embarrassed about letting down the image of her cousins bouncing across the Alpine snows with barrels of brandy around their necks.
Wasdale Mountain Rescue Team would like to thank both West Lakeland Veterinary Group and Galemire Veterinary Hospital who got in touch and gave invaluable advice and support. Finally, a massive whole 55kg thank you to Daisy the St Bernard who was so well behaved throughout the whole rescue, the perfect casualty you could say. 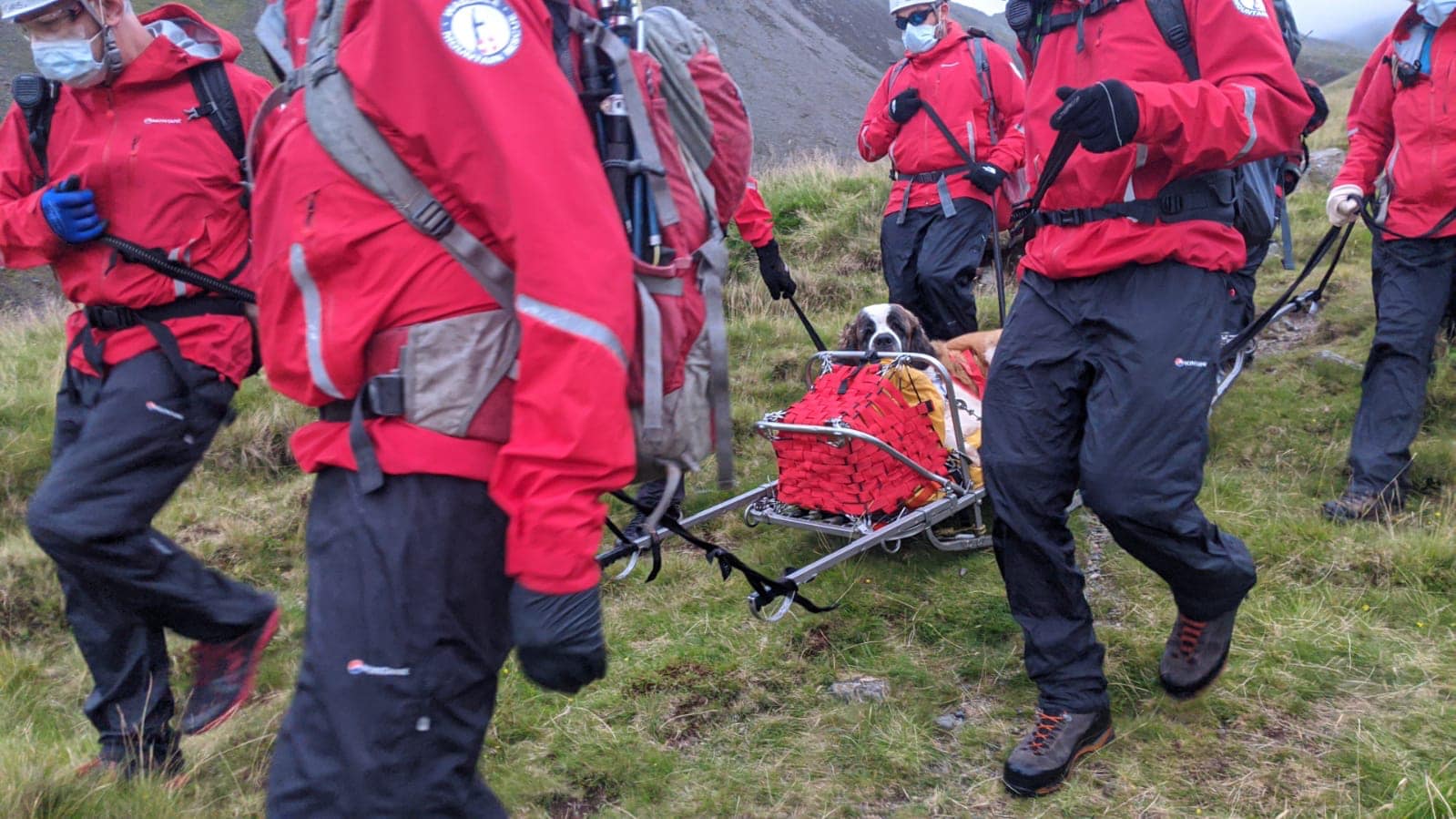 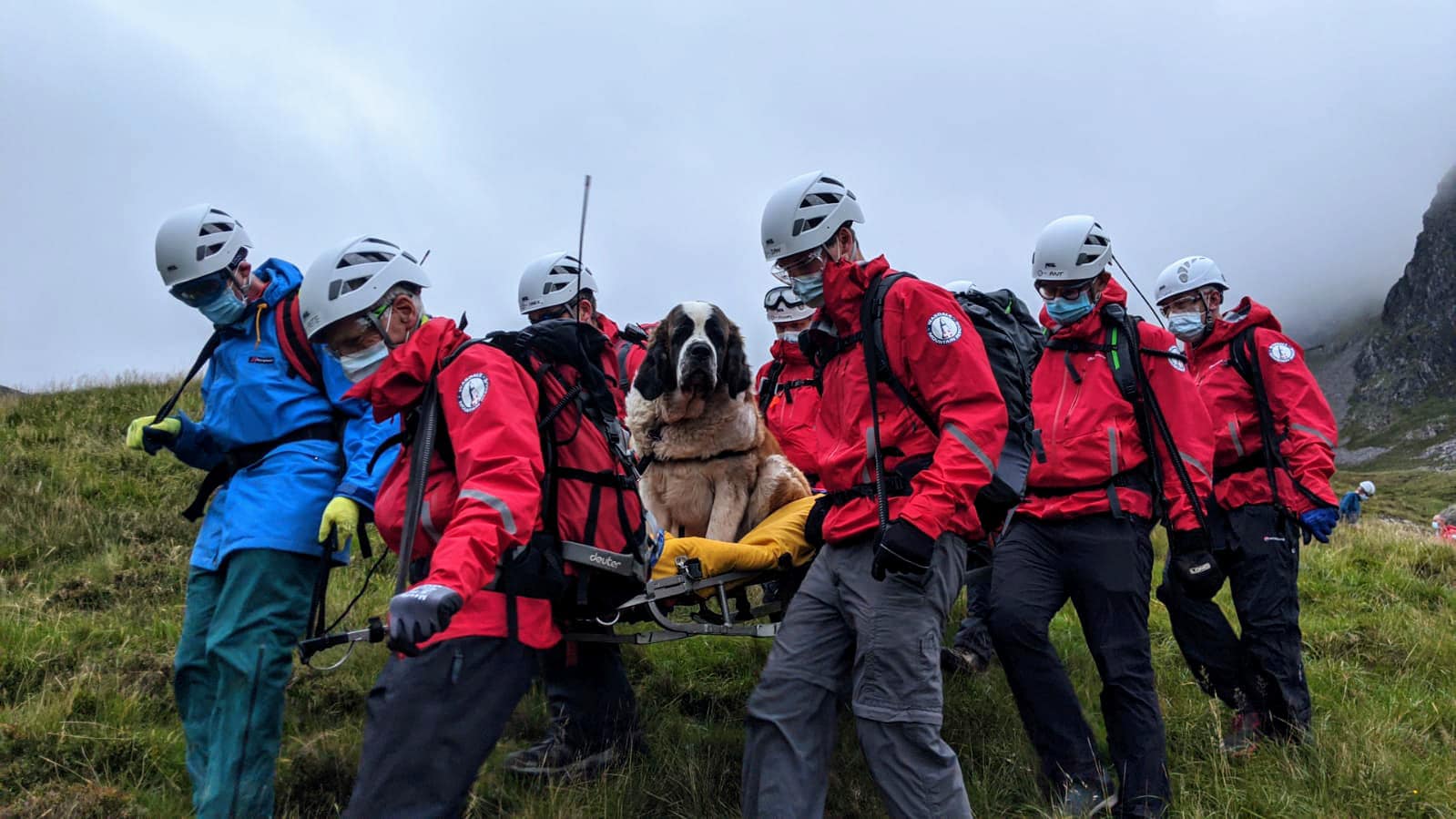 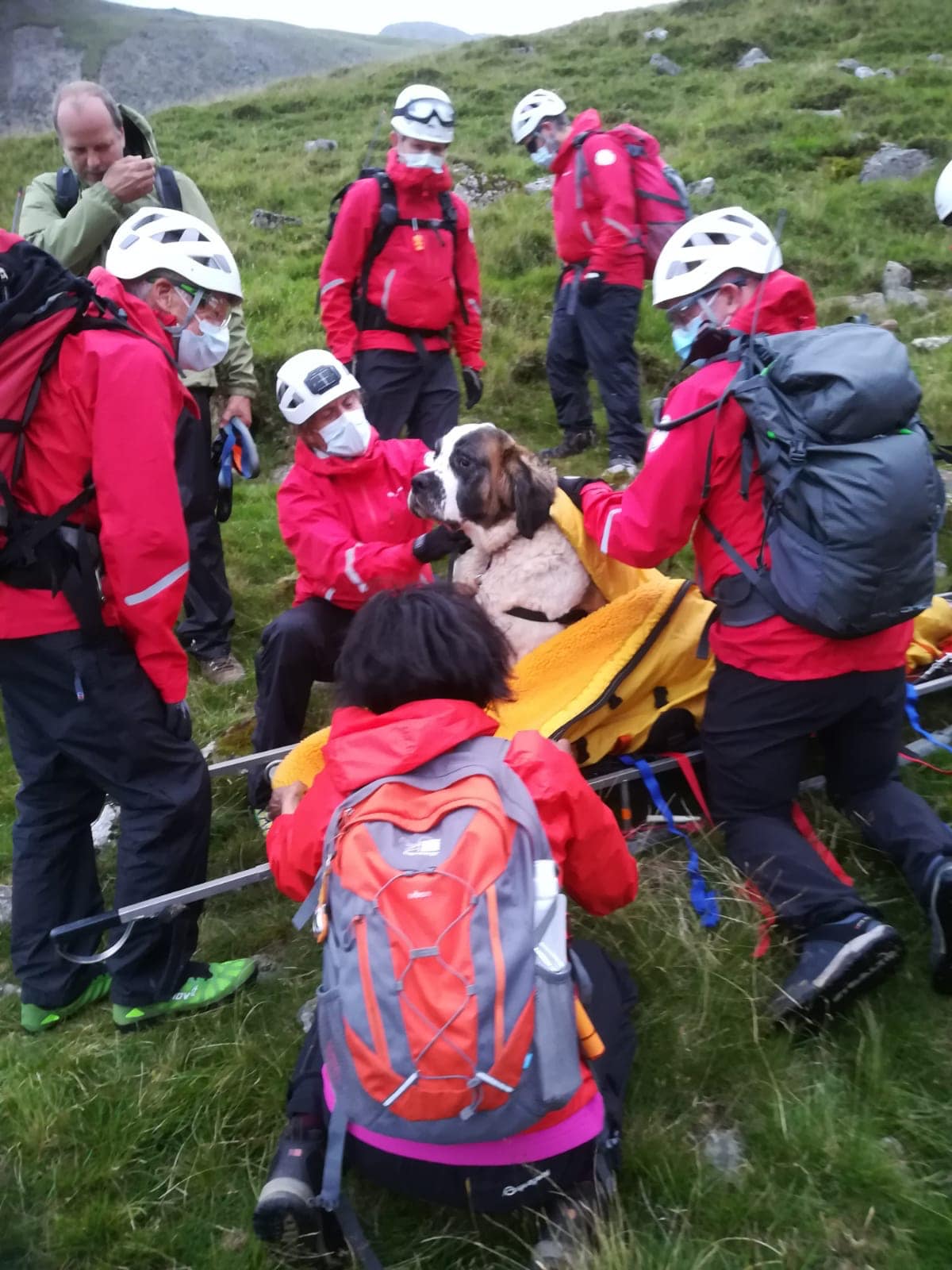 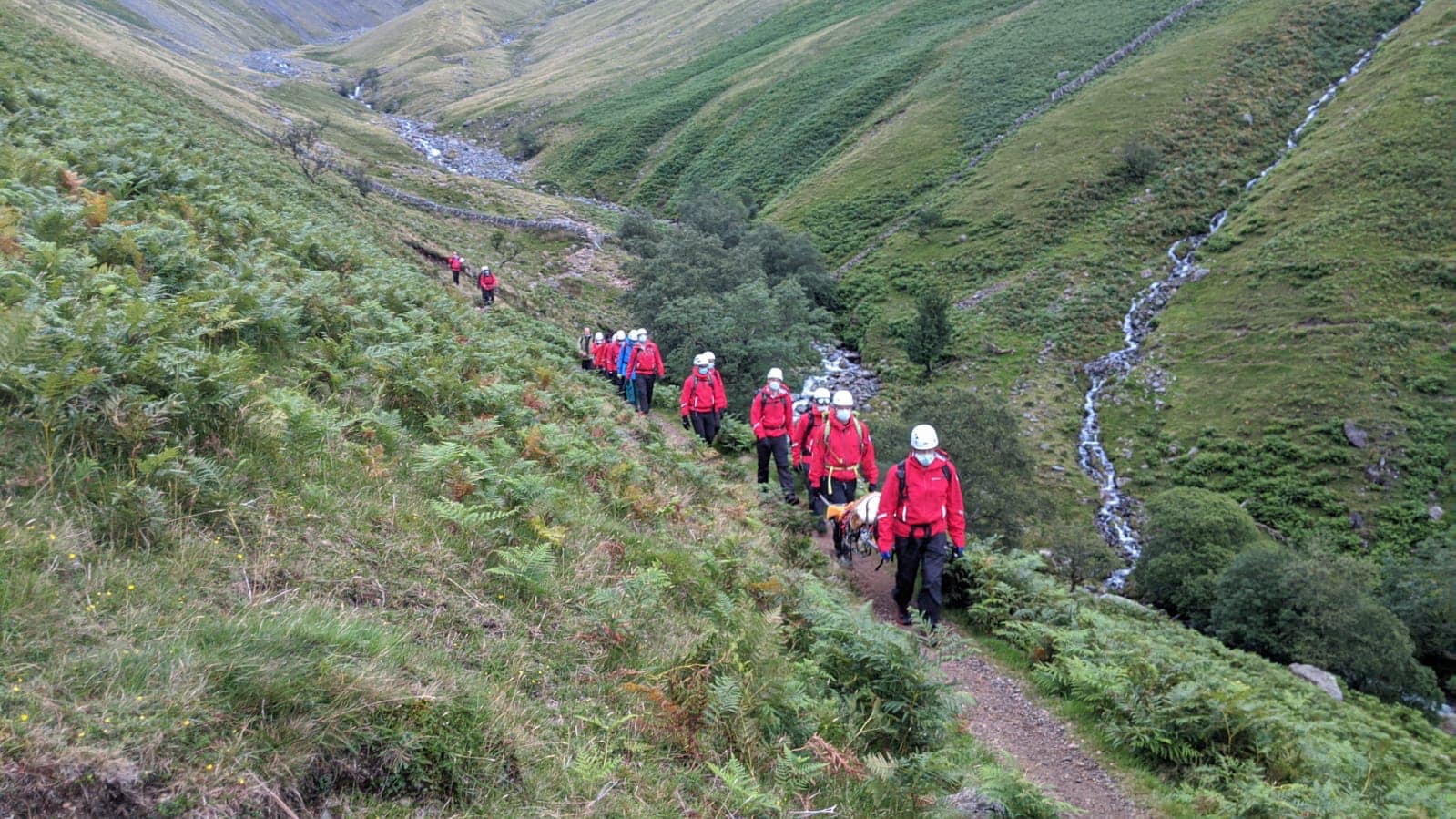 Incident28 in 2020 TypeLimited Callout — Other LocationBrown Tongue, Scafell PikeWeatherFineOther AgenciesGalemire Veterinary Hospital, West Lakeland Veterinary GroupTaggedDog RescueMembers of the team were delighted and humbled to meet up once more with Allan and Marie Brown. Read more…

Incident28 in 2020 TypeLimited Callout — Other LocationBrown Tongue, Scafell PikeWeatherFineOther AgenciesGalemire Veterinary Hospital, West Lakeland Veterinary GroupTaggedDog RescueSome of our members were out and about in Whitehaven & Egremont today fundraising for the team. It Read more…