One of the team’s more interesting rescues of the year was aired recently on BBC’s Close Calls: On Camera with Nick Knowles. It included the normal foot power and team vehicles, but also the team boat and a Great North Air Ambulance Service helicopter. All motive power worked in perfect harmony to access, treat and evacuate a casualty on the Wasdale Screes. The lady had broken her ankle badly and was in severe pain and significant distress. If you watch it you’ll see on the programme there is a lovely quote from her husband about the advance foot party reaching the scene as if ‘gliding across the rocks’. 😎😎

Following the Facebook post the Close Calls team contacted us to reconstruct the event and do some filming – which we were happy to do a few weeks later. Unfortunately we could not quite repeat the graceful arrival….. 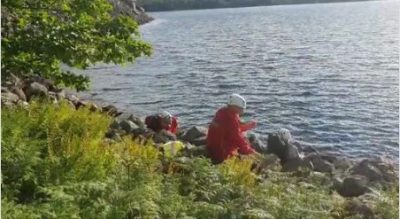 Here is a hilarious out-take

Categories: WMRT in the media

BBC Article on Using a Photo to Locate a Casualty

A BBC News article about how a photo taken on a casualty’s phone enabled the team to locate them. This was the second rescue of the day and the middle of three in 24 hours. Read more…

"A walker turned up safe and well after spending the night on the Lake District fells when he got lost. Three mountain rescue teams were involved in a major search for the man on Tuesday when he phoned for help saying he was lost somewhere on Crinkle Crags in Great Langdale..." Read more at Grough.

More than £30,000 is to be given to Cumbria’s fire service and a mountain rescue team to help them deal with future flooding emergencies. Wasdale MRT recieved a grant of £12,135 towards swift water rescue Read more…