The team were called by Cumbria Police after receiving a 999 call from a lady lost on her descent back to Wasdale (NT car park) from Scafell Pike.
Her call had initially been taken by Lancashire Police and she had only been able to give the first word of a What3Words location before the call cut off. The Team Leader managed to get a Phonefind location (shown below) and also to send a text message giving his phone number (Her phone was constantly going to voicemail). This enabled her to contact the Team Leader and she was given instructions on how to relocate the path and then continue her descent to the Wasdale valley via Sprinkling Tarn and Styhead.
Further texts were sent to her with encouragement and further instructions as her progress was monitored using MRMap and her clicking the link in Phonefind every 10 minutes or so. An anxious hour or more was spent by the Team Leader when contact was lost between Esk Hause and Styhead (probably out of mobile signal), as she was navigating using only Google Maps and the compass on her phone. However, when her position was re-established and she managed to call the Team Leader again she reported she could see the farm at the head of the valley.
One team member volunteered to go and meet her in failing light. Also, a second Team Leader had been helping with technical advice with the systems being used. 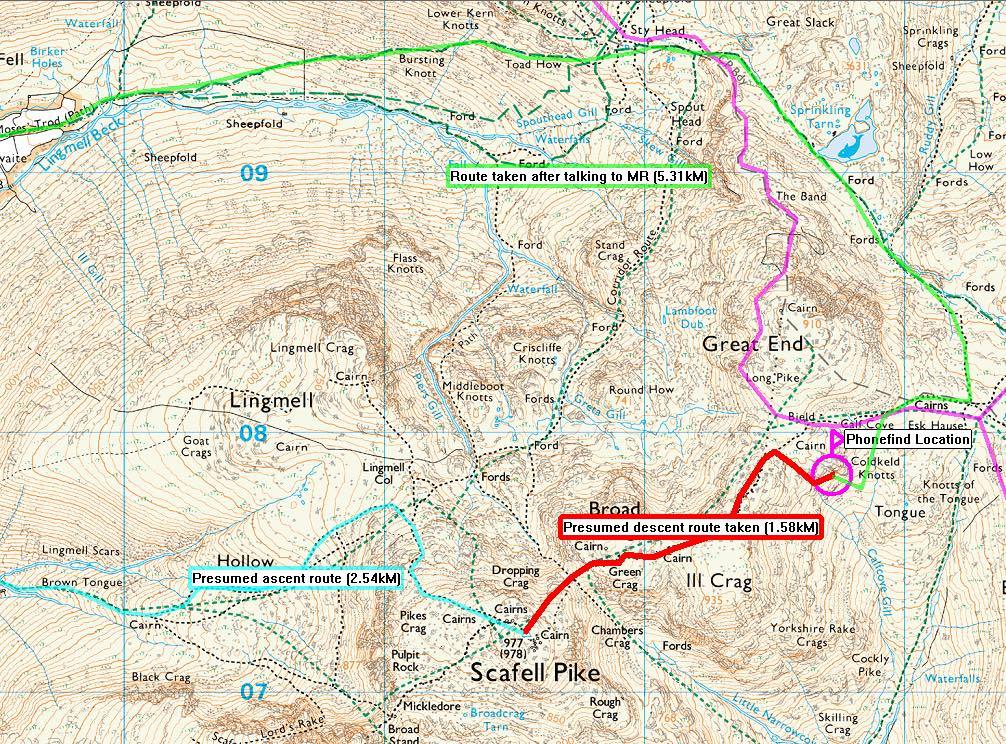 Incident70 in 2020 TypeAlert — Lost LocationCalf Cove, Great EndWeatherHill Fog, RainMembers of the team were delighted and humbled to meet up once more with Allan and Marie Brown. The Brown family and friends have Read more…

Incident70 in 2020 TypeAlert — Lost LocationCalf Cove, Great EndWeatherHill Fog, RainSome of our members were out and about in Whitehaven & Egremont today fundraising for the team. It was great to meet you all Read more…

Incident70 in 2020 TypeAlert — Lost LocationCalf Cove, Great EndWeatherHill Fog, RainTeam members will be at Egremont Farmers market this coming Friday 3rd December from 9.30am. Team merchandise will be available to purchase to raise Read more…