The team leader was asked for a dog handler and navigator to search upper Eskdale (Green Hole area) and up to Bowfell. Having opened the base and got the search team organised he then found that the two missing people (aged 72 and 16) had left Langdale earlier the previous day, with the intention of doing Scafell Pike and returning to Langdale. They had made a series of mobile phone calls between 1700 hrs and 2300 hrs, reporting that they were stuck somewhere on "the band

Incident29 in 2000 TypeCallout — LocationUnknown LocationThe 12 mountain rescue teams in Cumbria were jointly nominated for The Queen’s Award for Voluntary Service (QAVS) by Superintendent Matthew Kennerley in 2019. QAVS is the MBE equivalent Read more… 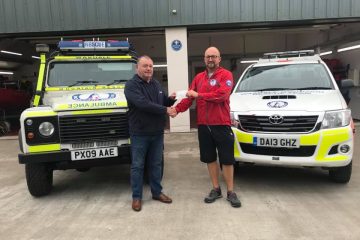 Incident29 in 2000 TypeCallout — LocationUnknown LocationAs part of Jacob’s Field Solutions behavioural safety scheme, one of their employees raised a safety observation. This was chosen as the best that month and as a result Read more… 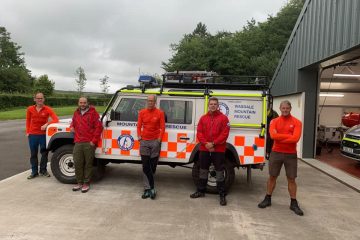 Incident29 in 2000 TypeCallout — LocationUnknown LocationIn August, this year’s probationary team members are around half way through their 12 months of training and we have already started our campaign to recruit next years probationers. Read more…